Learn more about my roots 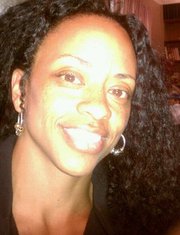 Temple Warrior Fitness was created by God and placed on the heart of Jana Walker in 2010.  Jana, is the youngest of three children born to Chester, PA natives Mercedes  Walker-Hutchins and Horace Walker.  Jana obtained her Bachelors degree in Sociology ( Social Service option)  with a minor in Women's Studies from California State University, Hayward in 1999.  In 2002, Jana graduated from the University of Pennsylvania with a Masters degree in Social Work.  After spending many years providing therapeutic services to people in a hospital setting, and giving birth to her second and third child, Jana stepped away from the social work profession to focus on raising her children and caring for her family.  It is during this time that Jana found Zumba Fitness (r) and a whole new world opened up.  It did not take long for Jana to become hooked on Zumba Fitness(r)  and subsequently,  she became an instructor in June 2010.
Jana's passion for the Lord and fitness have come together so organicly and have taken on a shape of their own.  Wanting to give back to the birthplace of 3+ generations of her family,  Jana began teaching  Zumba Fitness ( r) classes in the City of Chester and a divine relationship of love and mutual inspiration sprouted wings.  Jana did not always live a fit and healthy life. On the contrary, Jana was a smoker for 10+ years and was not a consistent exercise participant.  It was through prayer and submission to the Lord that strongholds were broken and a new creature emerged!   For it is written : "I can do everything through him who gives me strength." ( Philippians 4:13 NIV).  Through  the tempering of that process a testimonial was formed and drives the very core of Jana's desire to reach out and  assist other's on their journey within and with-out  to let the God within fully emerge.  For Jana it has become obvious that we each must step out on what we know and serve the Lord through the gifts that we have been given and NEVER second guess them.  Jana often says " Never doubt yourself,  becuase there are enough people out in this world to do that for you!"  Each class and session helps people step up one step closer to being who they are truly meant to be.  Jana believes that with each barrier a class member breaks their spirit gets stronger.  Under God's direction and with amazing tools like Zumba Fitness (r) and a balanced diet, Jana has lost over 50 pounds and  feels better than ever!
Powered by